Bright Kids grew from the knowledge I had as a parent that I could deliver a better nursery experience. One that I would be happy to (and did) send my own precious END_OF_DOCUMENT_TOKEN_TO_BE_REPLACED

We are a popular childcare provider with a reputation for providing flexible, quality, caring nursery END_OF_DOCUMENT_TOKEN_TO_BE_REPLACED

Peter Rabbit and Jemima Puddle-Duck were among the characters that inspired staff and youngsters at a special fun day to celebrate Beatrix Potter’s 150th birthday. As well as dressing up as their favourite character, staff and children at the Bright Kids Nursery in Crabbs Cross tried their hand at making their own lemonade and strawberry milkshake. They even put their baking skills to the test by making a tasty carrot cake. Also, parents were invited into the setting to get involved in planting with the children, which they were able to take home.

Manager of the nursery Anita Shepherd said everyone had a good day. “The children really enjoyed getting involved as most of them are familiar with the Beatrix Potter characters. The babies also enjoyed taking part and getting their hands messy creating wonderful pictures with a variety of vegetables. They were also getting involved in the gardening and planted a flower that they could then take home.”

The nursery even had a special visit from Pyjama Drama, which is a unique drama based classes for babies, toddlers and children up to seven years old. The sessions are packed full of drama games and activities, original songs and music, movement and role-play. In each class children sing and dance, play games and get involved in lots of role play and pretending. Anita said the Pyjama Drama session fitted in well with their Beatrix Potter day.

“Children had lots of fun while developing skills such as communication, confidence, creativity and concentration all based around the world of Beatrix Potter,” she said. “Children not only had the chance to learn about the exciting characters from the Beatrix Potter books but they also enjoyed a great hands-on day with baking, planting and a fun drama session.” 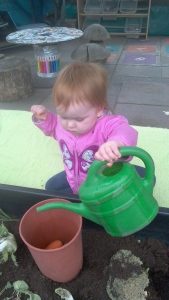 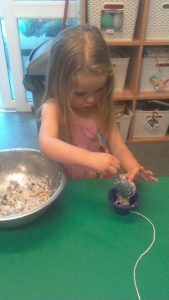 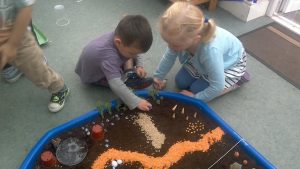 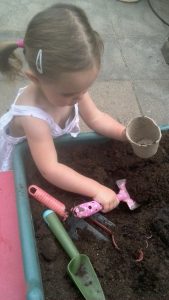