Bright Kids grew from the knowledge I had as a parent that I could deliver a better nursery experience. One that I would be happy to (and did) send my own precious END_OF_DOCUMENT_TOKEN_TO_BE_REPLACED

We are a popular childcare provider with a reputation for providing flexible, quality, caring nursery END_OF_DOCUMENT_TOKEN_TO_BE_REPLACED

A Studley dad will be using pedal power to fight back against ovarian cancer when he does a bike ride from Glasgow to London.

Matt Stanford has taken on the Man Power Challenge 2016, which will see him cycling an average of 100 miles a day over five days. The father-of-two decided to do the challenge after his wife, Jo, discovered she had the BRCA gene mutation, which means an increased risk of developing certain cancers, including ovarian cancer.

This is the same gene mutation that actress Angelina Jolie found out she had – and she went on to have surgery to reduce the chance of her having ovarian cancer.

Matt said: “Not long after I met Jo she sadly lost her mother to cancer. We then found out that Joanne had a BRCA mutation that greatly increased her chances of developing cancer.

“Since we found out about her BRCA gene mutation, we have been through plenty of highs and lows. All things considered it seemed like it might be about time I did something difficult, instead of her for once.”

Matt, who has two sons – Isaac, aged 5, and Henry, 3, will set off on his gruelling journey on June 29th arriving in London with the other ten cyclists on July 3rd.

Working as a training and development manager at MBK Training, based at Millennium House in Studley, Matt confesses that he has had to step his cycling training up a gear.

“Everyone has been so supportive of my challenge and I’m over half way to my target of raising £2,000,” said Matt. “The Man Power Challenge gives me the chance to inject some well needed money into working out the best way to reduce the number of people out there without mothers, wives, sisters and aunties due to deaths from ovarian cancer.

“When I signed up for the challenge it had been a fair while since I’d really been on a bike, but I’ve put in some hard graft over the last six months. “This is our chance to show the ladies in our lives just what they mean to us.”

* You can support Matt by going to his fundraising site at www.justgiving.com/Cycling-Man 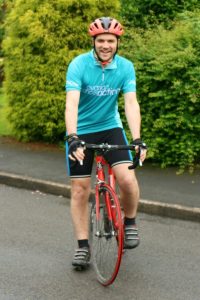