Bright Kids grew from the knowledge I had as a parent that I could deliver a better nursery experience. One that I would be happy to (and did) send my own precious END_OF_DOCUMENT_TOKEN_TO_BE_REPLACED

We are a popular childcare provider with a reputation for providing flexible, quality, caring nursery END_OF_DOCUMENT_TOKEN_TO_BE_REPLACED

A church in Northfield has thanked youngsters and staff at a Bright Kids nursery for their handmade wreath of poppies. Children at the setting on Norman Road in Northfield had been busy making the wreath to remember the soldiers who had fought during the different wars. With the help of staff youngsters made their own poppies out of paper and then decorated the wreath with glitter and tissue paper. 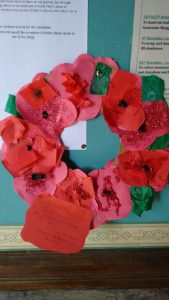 The children put a message on the wreath thanking the soldiers that fought for us during the wars. “We were so happy when St Laurence sent a message through to us saying it was nice to see the wreath on their display board, and they thanked us for it,” added Janette. “Some of the children watched the TV on Sunday and saw the Queen, the Prime Minister and others laying wreaths at the Cenotaph in London and they know they have been a part of that.”

On Sunday the Queen was joined by Prime Minister Theresa May for the annual service in central London. More than 750 Armed Forces personnel were applauded by the large crowd as they marched to form a square around the memorial.

Across the country thousands of poppy wreaths have been placed at memorials to mark Remembrance Day and to remember those who fought in past and present conflicts.