Bright Kids grew from the knowledge I had as a parent that I could deliver a better nursery experience. One that I would be happy to (and did) send my own precious END_OF_DOCUMENT_TOKEN_TO_BE_REPLACED

We are a popular childcare provider with a reputation for providing flexible, quality, caring nursery END_OF_DOCUMENT_TOKEN_TO_BE_REPLACED

Staff and children at a Redditch nursery were thrilled when the Queen sent them a letter, thanking them for their 90th birthday card. Youngsters at Bright Kids Nursery in Crabbs Cross had an event earlier this year when they learned about the Queen and made her a special card to celebrate her birthday. Now they have received an official thank you from Her Majesty, with a special letter from her Lady in Waiting. 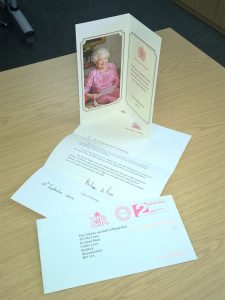 Anita Shepherd, manager at the nursery, said having a letter from the Queen was exciting for staff and children. She said: “The preschool children created a massive birthday card, which was very pretty with lots of glitter and sequins on it. Also they had a Queen’s tea party, made tiaras and enjoyed craft activities. They all made the card jointly, and it was posted to the Queen. It was such a surprise to get this thank you from Her Majesty.”

Anita said the stamp on the envelope showed it had been sent from Balmoral Castle, and the Queen’s own stamp was included. “We got a card with a picture of the Queen on it, and a lovely message inside. There was also a letter from her Lady in Waiting. The children were really excited, but I think the staff were even more excited. We are going to get it all framed and hang it up somewhere.

“I think the children learned a lot about the Queen when they were doing the activities back in June, the older ones knew about her and had seen her on the television and in magazines. So, to get a letter from her makes it seem even more real for them – the Queen is a real person, and not just someone they have learned about at nursery.”