Bright Kids grew from the knowledge I had as a parent that I could deliver a better nursery experience. One that I would be happy to (and did) send my own precious END_OF_DOCUMENT_TOKEN_TO_BE_REPLACED

We are a popular childcare provider with a reputation for providing flexible, quality, caring nursery END_OF_DOCUMENT_TOKEN_TO_BE_REPLACED 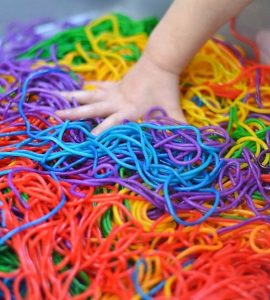 Chinese New Year celebrations are taking on a new twist at the Studley setting as youngsters get messy with some noodle play time. Children at the Bright Kids Nursery in Briarwood, The Slough have been getting messy with the spaghetti-like food as they celebrate the start of the year of the Rooster. Deputy manager Tina Davis said food is taking a central part of the Chinese New Year celebrations at the nursery. “The children love sensory play time and so we thought it would be great to let them play with noodles, which we are dying different colours,” she said. “They love to try out a range of different food and so for tea time we are trying out Chinese food including spring rolls and wontons.”

Tina said the children have also been making masks in preparation of the festival, which is celebrated around the world. “They have made some fantastic masks and have enjoyed learning about the different animals that are involved in Chinese New Year,” she said. “We have said goodbye to the year of the monkey and have welcomed the rooster – these are animals that the children are familiar with and have enjoyed learning about.” The children have also been playing with red play dough. In China, red is synonymous with the New Year, symbolic of good luck, prosperity and joy. The colour corresponds with fire, an element considered to provide warmth, enthusiasm and creativity.

The main celebrations in London, which were believed to be the biggest outside Asia, were yesterday – Sunday, January 29. Hordes of Londoners descended on Trafalgar Square and Chinatown for a spectacularly colourful parade to mark the start of the Chinese New Year. Dancing lions, acrobats, puppet artists and vibrant floats took over as London celebrated the year of the rooster. The parade began at 10am in Trafalgar Square but the festivities continued throughout the day, with martial arts displays and lots of live music.

A popular part of new year celebrations is a Chinese Wishing Tree. The ancient tradition of the Wishing Tree is synonymous with good luck and fortune, and the legend goes that hanging your hopes for the coming year on a Wishing Tree will encourage your dreams to come true. Members of the public are invited to visit the tree and receive a bespoke wish written by an authentic Chinese calligrapher to take home along with a golden chocolate coin, for added good fortune.