Bright Kids grew from the knowledge I had as a parent that I could deliver a better nursery experience. One that I would be happy to (and did) send my own precious END_OF_DOCUMENT_TOKEN_TO_BE_REPLACED

We are a popular childcare provider with a reputation for providing flexible, quality, caring nursery END_OF_DOCUMENT_TOKEN_TO_BE_REPLACED

A right royal time has been had at a Redditch nursery as celebrations took place to mark the Queen’s 90th birthday.

Youngsters at Bright Kids Nursery in Crabbs Cross got into the party spirit by arriving at nursery wearing red, white and blue – or in fancy dress on a royal theme.

Her Majesty would have been proud of their plans for the day as the youngsters set about making crowns, and enjoying a tea party with sandwiches, cakes and jelly.

Nursery manager Anita Shepherd said both the staff and children enjoyed the day.

“The children enjoyed traditional party games and then we learned about the Queen and how important she is to us,” said Anita.

“It was like a big street party, with a lovely atmosphere – the children really got into the theme of the day and had a lot of fun.”

This weekend thousands of people turned out to watch the annual Trooping the Colour parade for the Queen’s official 90th birthday.

Dressed in a vivid lime green coat and matching hat, the Queen appeared on the balcony of Buckingham Palace with members of her family, including Princess Charlotte, for an RAF flypast.

Visible in her vibrant ensemble, the Queen smiled and waved to crowds as she was driven with the Duke of Edinburgh in an open-top carriage up the flag-lined Mall.

Anita added: “We all enjoyed watching the Queen’s birthday party events on the TV at the weekend and it was wonderful to know that we had helped the children to take part in the celebrations.

“The children also made their very own birthday card which was posted to the queen, so we are hoping for a reply back – you never know.” 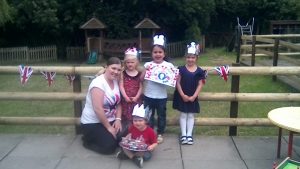