Bright Kids grew from the knowledge I had as a parent that I could deliver a better nursery experience. One that I would be happy to (and did) send my own precious END_OF_DOCUMENT_TOKEN_TO_BE_REPLACED

We are a popular childcare provider with a reputation for providing flexible, quality, caring nursery END_OF_DOCUMENT_TOKEN_TO_BE_REPLACED

The campaign against the government’s policies on free childcare places bubbled over this weekend as MPs and ministers were faced with the latest drive by nursery owners.

Thousands of individually designed cards, describing the pressures of running a nursery under the government’s current funding rates for three and four-year-olds, were sent out on Sunday – National Children’s Day.

The cards have been created as part of the Champagne Nurseries on Lemonade Funding campaign and each one has been designed by a nursery owner.

Even though every card is different, the design is based around the champagne and lemonade theme of the campaign with a serious message inside about the crisis nursery owners are facing.

Among those in the firing line to receive the cards from the recently dubbed Champagne Campaigners is childcare minister Sam Gyimah.

Spokesperson for the campaign, Tricia Wellings, said the government’s cap on what nursery businesses can charge is having an effect on some settings.

“Childcare is in crisis in the UK – and it has got so bad that, whereas in the past nurseries have been competitive with each other, now we have united,” says Tricia, chief executive of MBK Training Group in the West Midlands, which operates three Bright Kids nurseries.

“Parents have been very supportive, as they value the nursery care and education their children have before they start school, they want the best for them. Now, as the campaign gains more momentum, we need to make MPs and ministers sit up and listen.

“They can’t ignore us any longer – as one voice we present a strong united front, and we refuse to back down on this.”

The Education Secretary has called on nurseries and other childcare providers to deliver 30 hours of free childcare available nationally from September 2017 to working parents.

However, research by the National Day Nurseries Association (NDNA) showed that at the moment, nurseries are managing to offer 15 hours of free childcare a week because they plug the shortfall in government funding by charging for additional hours, something that will no longer be possible.

The government provides around £3.80 per hour, but nursery places cost on average around £5 per hour – and that pays for staff, rents, training and other costs such as equipment, lighting and heating.

According to the research the average nursery is down around £34,000 a year due to the funding gap, with 89% of nurseries making a loss on ‘free’ places – and this is only going to get worse when parents can claim the 30 hours childcare.

Just this week the Department for Education called on councils to intervene if they become aware of any nursery providers trying to charge parents for free childcare provision.

“We have seen how the 30 hours childcare scheme has been boycotted in York, where the owner of Polly Anna’s nursery said he was losing £20,000 a year offering the 15 hours and so would definitely not be offering parents the 30 hours.

“If all nursery owners and pre-schools boycotted the 30 hours scheme then the government would be forced to do a U-turn.

“Nursery businesses need to make a profit so we can reinvest it in our nurseries, and in our staff and training in particular.

“It is high time the Government acknowledged that there is no such thing as cheap childcare – and that it’s not free for us.” 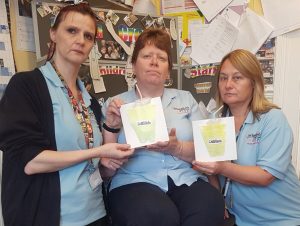 Tricia Wellings (centre) with her card designs ready to be posted off at the weekend. Managers Anita Shepherd (left) and Lorraine Ashford (right) from Bright Kids Crabbs Cross helped in making the cards. No children have been involved in campaigning or card making.